In war time ordinary men and women are asked to do extraordinary things. This is the story of the part some Isle of Wight merchant sailors played in rescuing allied troops from the beaches of Dunkirk.

Many books and articles have been written about the way in which, in 1940, a doomed British army was rescued from almost inevitable defeat and surrender by the skill and dedication of the Royal Navy with the assistance of an armada of civilian boats, and the bravery of Royal Airforce pilots. The aim of this website is to move from a description of the grand theatre of war down to a local level and tell the tale of how some Isle of Wight men of humble backgrounds responded when called upon to face the danger of death and injury for the sake of their country. 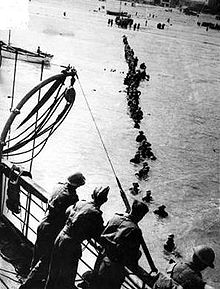 However, this story is not complete and I would like to encourage anyone with information to add or stories to tell about the Island’s heroic contribution to the operation to add their contributions. I have chosen to tell the story of the motor-barge The Bee and her crew. This is partly because her skipper was my great uncle, I was born in his house and during the war years while my own father was away in the Army I lived there, but also because we are lucky enough to have a complete narrative of the Bee’s voyage written by the ship’s engineer.

There were five other similar Island boats which went to Dunkirk. These were the MFH, The Murius, The Chamois, The Hound and the Bat. It would be wonderful if relatives of their crews could contribute to this website.