You are here: Home / Further Reading / The Isle of Wight in Wartime

Before the introduction of roll-on-roll roll-off ferries the Isle of Wight was totally dependent on almost all supplies, including food, being carried by a fleet of small freighters.

During the Second World War not only was the population of the Island dependent to a large extent on food from the mainland but also the large number of troops stationed on the Island had to be fed. 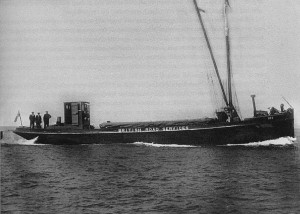 The small freighters continued with their work right the way through the war although they presented easy unprotected targets to enemy aircraft. The freighter’s daily journey took them from Newport, passing through and some times stopping at Cowes, to Portsmouth or Southampton to load and then, perhaps the next day, to return to Cowes or Newport Harbour to unload. One of the ships, the Tantivy, was requisitioned by the Navy at an early stage of the war to ferry ammunition from Marchwood, near Southampton to Navy ships in the Solent . (Her name was changed to Tantivy 2 as there was a submarine called Tantivy). The remainder, including The Bee, The Bat, “M.F.H.” (Master of Fox Hounds!), Chamois, The Murius and The Hound, continued the cargo service to and from the Island. Their cargoes were very varied and included the long steel tubes which were used as part of Operation Pluto, the oil supply pipeline from the Island to the D Day beaches in Normandy. The men who worked on the boats, usually four on each boat, were merchant seamen and were not called up to do other miltary service as their jobs were seen to be vital to the war effort.

It was quite remarkable that not only did the ships return safely from Dunkirk but also that there were no ships lost doing their usual job. The distance from the Island to the mainland is short but it must have seemed a long way when an enemy plane could have attacked a ship at any time. And there were perils lurking in the water too.

In September 1941 the Portsmouth to Ryde ferry, a paddle steamer called SS Portsdown struck a mine just outside Portsmouth on the very route that the Island freighters took every day. The Portsdown sank with the loss of twenty passengers and crew. 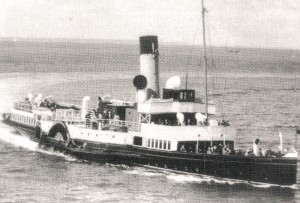 The Isle of Wight itself was a dangerous place to live in war time. Not only was it on the route for German bombers attacking the major ports of Portsmouth and Southampton but it attracted much unwanted attention from the Luftwaffe itself. In Cowes and East Cowes there was a major military shipbuilding and aircraft industry. Nearly fifty ships for the navy were built in the J.Samuel White shipyard there from 1939 to 1945. They ranged from destroyers, (most of them), to escort vessels. In addition they built twenty landing craft and thirty eight motor torpedo boats. At the Saunders- Roe factory at East Cowes around 6,000 employees worked on the production of mainly of amphibious aircraft. 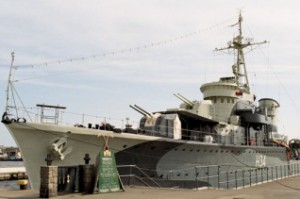 At the beginning of May 1942 in their most determined effort to destroy the arms industry on the Island the Luftwaffe attacked twice with 150 Dornier Do 217 bombers. Over 200 tons of high-explosive and thousands of incendiary bombs were dropped on Cowes, East Cowes, Newport and Ryde. Though the devastation in Cowes and East Cowes was awful it would have been much worse were it not for the fact that a Polish destroyer, Blyskawica, (Polish for lightning), was in the harbour where she had been built, for a refit. The destroyer left her moorings and anchored off the harbour and ferociously defended the town with anti-aircraft fire.

In all, during the war there were 125 attacks on the Island between 1940 and 1944. A total of 1,392 high explosive bombs went off and a further 371 failed to explode. There were also thousands of incendiary bombs dropped. Ninety two men, ninety women and thirty two children were killed and 10,873 buildings damaged.*

*Source of statistics – Isle of Wight at War by Adrian Searle