The Bee goes to war

You are here: Home1 / The Bee goes to war

The Bee goes to war

The Isle of Wight County Press announced on 4thFebruary 1928, that Shepard Brothers had taken delivery of a new motor barge, The Bee, which was to replace a sailing vessel of the same name which had been carrying goods to and from the  Island since 1801. The new vessel arrived in Newport from Faversham, where she had been built at James Pollack and Sons shipyard, with a cargo of cement for ballast on 31 January 1928. The Bee’s routine role was to be dramatically interrupted in May 1940, while moored in Portsmouth. 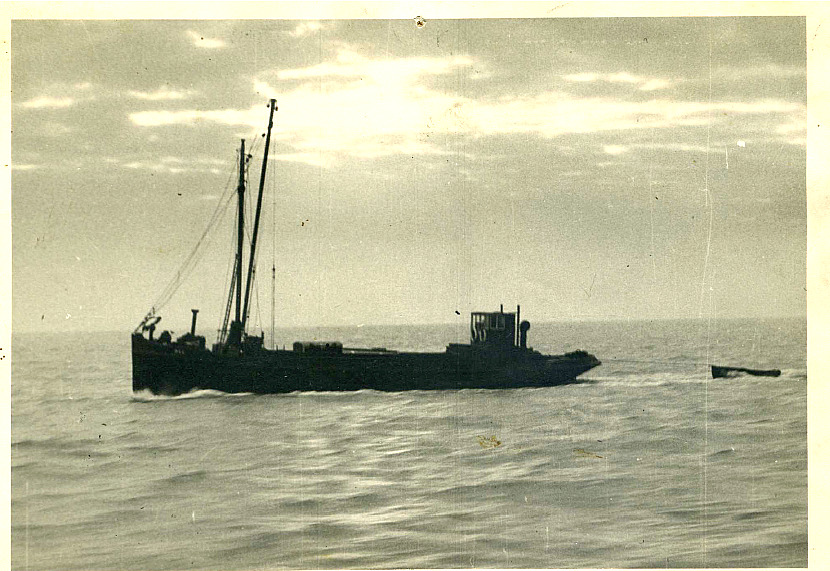 The Admiralty signalled the official start of Operation Dynamo at 1857 on Sunday 26th May 1940.

Two days later, on Tuesday 28th May, the Bee was in Portsmouth Harbour and the crew were routinely unloading cargo, when a Naval Officer boarded the ship and told the captain that the Navy was taking over command of the vessel. A naval crew would take over unless the crew volunteered to take part in a dangerous mission. Like the crews of the other Island ships, they all did. By Thursday 30th May the crew found themselves being bombed and shelled off the beach of Dunkirk.
The full story of the Bee’s adventurous voyage was written told by Fred Reynard, the engineer…

“We were unloading iron plates at Portsmouth Dockyard when a naval officer came aboard and informed us that the Bee was being taken over by the Navy. He said the task for which she was required was dangerous and the crew could leave for home if they wished and a naval crew would be put aboard. Alternatively, the Navy would be grateful if we volunteered because of our expertise in handling the craft. The crew consisted of Bill Trowbridge, skipper; Harry Downer, mate; myself as engineer; and Marc Hocking, aged 18, (see footnote), as fourth hand. We all agreed to stay with the ship. A Royal Navy Sub-Lieutenant was seconded to Bee and four days rations put aboard before we left harbour at 7.30 in the evening. We steamed through the night and all the next day, arriving off Ramsgate at 5 p.m. The officer went ashore for instructions and was back within the hour. He told us the British Expeditionary Force was being driven into the sea and that our task was to lift as many off the beaches near Dunkirk as possible. We were again offered the opportunity of quitting; again we declined and at 7.30 p.m. the Bee set off.” 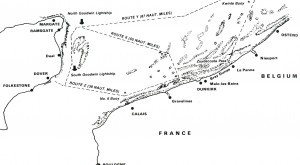 The three routes to Dunkirk planned by the admiralty. To save time Captain Trowbridge chose Route Z. This route was close to enemy guns on the shore and the Admiralty advised that it should only be used at night.

“Two routes had been offered to the officer and he was free to discuss these with the crew. We could make for Calais, (Route Z), but would come within range of shore batteries, or we could travel by a more northerly route, a distance of 85 miles, but there German E-Boats were making a nuisance of themselves. We opted for the short route via Calais, travelled on our own and timed our arrival for the cover of darkness. We dropped anchor as per instructions to await the dawn. Overhead was the drone of aircraft, the sky was stabbed by dozens of searchlight beams, while all around one could see the dark shadows of ships large and small, all at anchor. We remained unmolested. In the distance one could hear the rumble of guns and the explosion of bombs, while fires raging in the town lit the sky. Dawn was zero hour, 3.30 a.m. Sleep was out of the question and we busied ourselves hanging a scrambling net over the bows. Dawn finally broke, we raised anchor and made for the shore.”

“What a sight met our gaze. The sea was covered in oil and there was wreckage every­where. The docks were burning, as were huge oil containers and over the town of Dunkirk was a pall of black smoke. The shores were a sea of human beings and there was a constant stream of men coming over the dunes and down to the water’s edge. A light from a Very pistol warned us of impending danger. An aircraft appeared, machine-gun fire struck the water close by, but no bombs were dropped. Other planes were busy dropping bombs and machine-gunning along the beach. We proceeded towards the shore, and the nearer we got, the more destruction we saw. Upturned craft and human beings floated every­where. Men were tending the wounded. Back came the bombers and a near miss shook Bee badly. Warships opened up on the planes. After a direct hit on a destroyer she listed heavily to port. Another destroyer, laden with troops, was hit and sinking. Men swam towards the shore; some were picked up by smaller craft, but a large number, torn and mangled, went down with the ship. Less than an hour since dawn, we were still afloat, yet seemingly had spent a lifetime in hell.”

We were now nearing the beach; another near miss, no one could be lucky enough to survive this holocaust. Now a welcome sight. Nine of our fighters arrived and straight into the Huns they went; easy targets those dive bombers. Some scattered and fled, some went down. Our planes could not remain long and back came Jerry with his unceasing bombing, but still that procession of men came down to the water’s edge. There was nowhere else to go. Cars, lorries and motor cycles were being driven into the sea or destroyed on the beaches. A lone chestnut horse ran up and down the beach. More RAF planes arrived, one crashed on the beach, but with more of our planes what a different story it would have been. Bee drove at full speed on to the shore and grounded; they came towards us, some wading almost to their necks in the water, those men of the BEF, and we realised that our efforts to assist them aboard with ropes and scrambling nets were futile. Waterlogged and utterly exhausted, many wounded, it was impossible for them to make such an effort. We quickly sawed the ship’s ladder in two, placing one half on each side of the bow The success was reward enough to see these men file aboard some equipped with nothing but a covering of clothing, but all with a determina­tion to live.  A pause in loading for another raid. We escaped, but just along the beach there was a terrible toll in life and little ships. Another start and with a few interruptions we filled to capacity Every spot where a man could stand was packed both down in the hold and on deck. Their weight was such that we were stuck firm on the beach and    for   over   an   hour  we   struggled   to   free ourselves   until our plight  was   spotted   by   a French tug and we were pulled free.

When finally underway our elation was short lived. We were ordered to transfer the troops to a larger vessel lying offshore, (375 soldiers were transferred to a tug -editors note), and not once but twice more returned to the beach for further troops. Fearing that any further grounding might be permanent we used our pinnace to pick up the soldiers, but this proved a painfully slow process amid ever increasing bombing and shelling. Where there had been ten or a dozen enemy planes dive-bombing ships earlier on, numbers now seemed more like 50, and not only was there more shelling it was also increasingly accurate. Just as we were leaving a naval motorboat came on the scene and picked up another twenty men that she later transferred to us. However going in for another pick up she capsized in the , by now, rough seas and all but one of her crew swam ashore. The other member tried to swim out to us but he made little progress against the tide so we threw him a life buoy on a line and eventually pulled him on board. Just as we were leaving for a second time we saw a small boat leave the shore so we waited for her to and brought five French soldiers on board.

When we finally pulled away for the last time and were ordered to continue with our human cargo to Ramsgate, it marked the end of the most unforgettable 24 hours of my life.

We reached Ramsgate and tied up to discharge our troops amidst expressions of gratitude, not solicited and better left unsaid, for simple thanks could move us to tears in the wake of such an experience. The stronger helped the weaker up the gangway and they were met by ladies with cups of tea, cakes and cigarettes while the Red Cross were there to take charge of wounded So that other vessels could make use of the landing facilities we moved Bee into the middle of the harbour and the telegraph finally rang ‘finished with engines’. I went up on deck, lay down on a folded   canvas   and   as   sleep   overcame  me I remembered a lad who had knelt by the engine room hatch and recited the Lord’s Prayer.”

During the rescue one of the Bee’s propellers was fouled by a piece of wire and so she could only use one engine. When she got to Ramsgate the skipper was ordered to return to Newport for repairs. On her way back she passed the Hound, the MFH and the Murius on their way to Dunkirk. 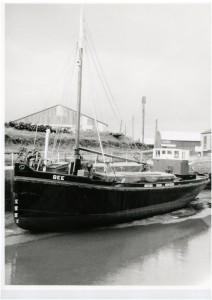 The Bee in Newport Harbour at low tide, after a repaint in 1961 Photo Roger Wills

Just like the other vessels working on the River  Medina the Bee was shallow  draft so that she  could easily sit on the mud  when the tide was out. She was 24 metres in length, weighed 45 tons and was powered by two 44 hp Bolinder engines

Her draft was just two metres when loaded. This was a real advantage for her work on Operation Dynamo as she was able to go very close to the shore to pick up troops.

Footnote – While working on one of the boats in December 1968 a large wave hit a barge which was being towed from Portsmouth. The tow rope snapped and wrapped round Mr Hocking. He died a week later from injuries he received. 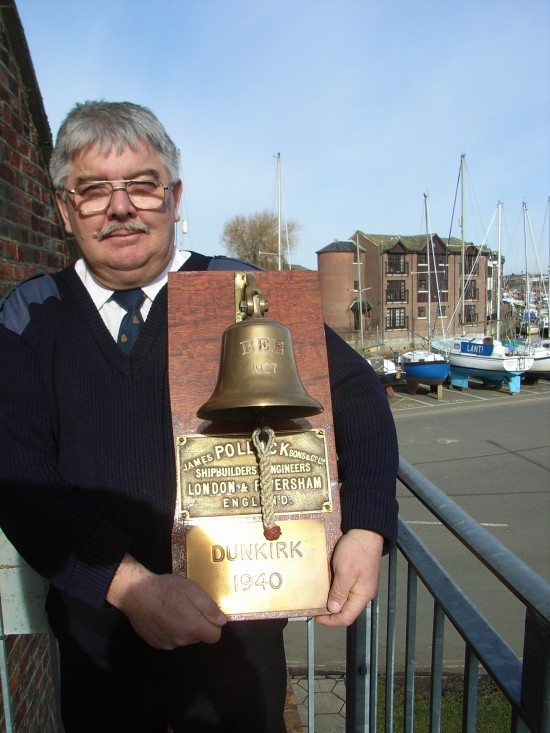 Momentos of the Bee in the possession of the Newport Harbour Master, Mr Wayne Pritchett