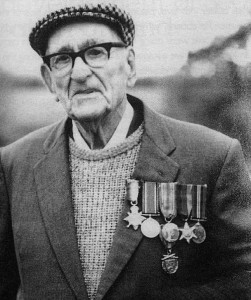 Fred Reynard was born in 1895. His father, George, was a labourer who had moved to  the Island from Beaulieu where he was born in 1868. His mother, Clara was from Newport. Fred was the fourth of six children. The family lived 15 Victoria Road, Newport.

He was clearly a talented leader. In the First World War he was soon promoted to sergeant in the Hampshire Regiment. He was in the  1st/8th Battalion  Hampshire Regiment (Isle of Wight Rifles). On 30th July 1915, at the age of nineteen, as part of the 54th Division he and his comrades embarked on the Cunard liner, Aquitania, in Liverpool. Their destination a week later was Gallipoli, Turkey. There British troops were engaged in a terrible battle with the Turkish Army, (under German Generals), to occupy a piece of land which controlled naval access to Istanbul. The Isle of Wight Rifles landed at Suvla Bay on 9th August and found the conditions quite chaotic. Despite having very poor preparation and badly defined objectives the Regiment was ordered to attack, over open countryside, a ridge held by the Turks. They had almost no artillery support. There was terrible loss of life, (including Bill Trowbridge’s 17 year old brother, Harry), and the Regiment had to withdraw. Fred Reynard survived the assault and later served in France in the Machine Gun Corps. His outstanding performance in this Corps led to him being awarded a commission to Second Lieutenant on 12th April 1917 and later promotion to Lieutenant.